Pell and Barnes have explored methods for automated or live movement processing including use of the Rokoko motion-capture system and the OpenPose machine-learning algorithm. The Rokoko Smartsuit Pro uses 19 sensors configured via wires and a wearable suit adjusted on the body. The Rokoko Inertial Measurement Unit (IMU) uses accelerometer, gyroscope, and magnetometer in order to deliver full spatial and rotational tracking. The IMU is paired within the virtual production software Rokoko Studio. The suit is set to a regional magnetism, connected by ethernet cable to a local computer, established on a local Wi-Fi network, and then plugged into a portable lithium battery. Each sensor is tightened in place by Velcro straps, and final connection is initiated by a configuration pose. The default Calibration sequence required a 3 seconds count to get in position, followed by 2 seconds of holding still. The single static pose can be described as hands held to sides with feet shoulder width apart, head tilted forward. We refer to this as Pose 0, or the Calibration Pose. Standard calibration poses for motion-capture IMU and human gesture-controlled system configuration includes the axial points in the RoM 0°, and then the test gesture is usually followed into the 90° T-Pose, and full 180° Shoulder AA gesture. 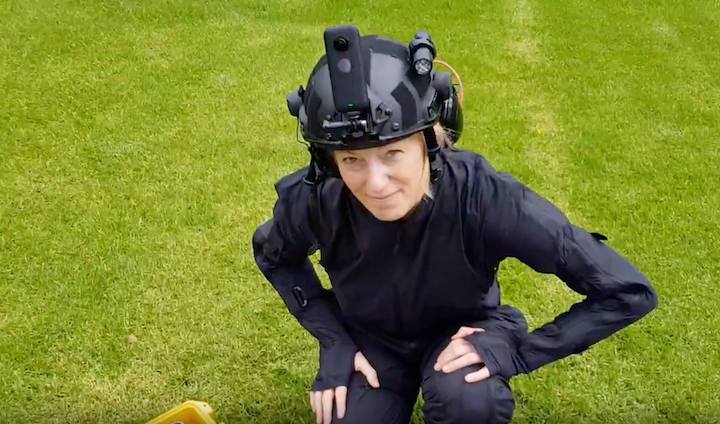 Sarah Jane Pell testing the Rokoko Motion Capture Suit in proximity to the magnetic fields at Monash University Clayton Campus, and other wearables 2019.

In MIVP Rokoko motion capture studio trials, Pell & Barnes noted that rapidly changing direction or getting too close to a magnetic source (such as the MIVP CAVE2 floor), the Mo-Cap data would shudder, creating a visual tremor, or drop-out, loosing data connection from one or more sensors. Some of these errors could be corrected manually using a filter, but in most cases, the system needed recalibration. Pell, Barnes & visiting choreographer Richard Move performed field studies to test and refine systems integration and develop a methodology suitable for the analogue astronaut to deploy and self-monitor during an EVA simulation. The first of these studies took place over several hours at The Grange Reserve, Australia (the site of the largest mass-witnessed daylight UFO sightings Westall 1966). The site was selected for both form and content: it included a replica scaled silver UFO and playground equipment designed to encourage play and performance based on motion, gravity and ‘warp speed’, and the interactions with the hardware, and the complex, fast motions, enabled the team to test the blue-tooth capability under extreme performance conditions and with significant interference from metal/magnetic objects in the field. The “alien” park FBX files were imported into Unity and assigned to animate a rigged humanoid Genesis 8 Female avatar for the purposes of the RoM study with ERAU [See. the 70th International Astronautical Congress Paper on Human Spaceflight Performance]. While Pell & Move curated the data into discrete art with a speculative lens of selecting the highest fidelity analogue conditions for the expression, with technical archival clarity, and emotional authenticity [See. the live performance in the CAVE2 Stellar Corpus].